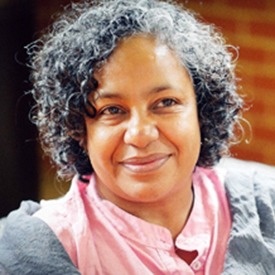 René August, a black South African woman, is co-director of The Justice Conference South Africa. She also works at The Warehouse, a church network in Cape Town dedicated to addressing poverty and injustice effectively. An ordained priest in the Anglican Church – South Africa, she served under and was mentored by Bishop Desmond Tutu.

Raised in Apartheid South Africa, August was baptized in the United Congregational Church and confirmed in the Methodist Church before seeking ordination in the Episcopal Church. Surrounded by suspicion, she learned how to hold both paradox and ambiguity, as well as the survival skills necessary to think quickly, run fast and listen carefully. She gained an innate proficiency when it came to discernment and communication, and following her formative years in Mitchell’s Plain, held her first job at an inner city church. There, she discovered a love for the city, which carried on to various ecumenical contexts.

Given her work at The Warehouse, Rene August spends the majority of her time with church leaders. She hates conflict enough to get involved in conflict transformation, just as she hates injustice enough to bring about as much justice as possible. She abhors the exploitation of our planet enough to work for its restoration, and she believes in the local church, the depth of learning and the power of working with a team. As a whole, August desires to find new ways and tools to read sacred texts in connection with historical and contemporary contexts. In all of her work, both with FreedomRoad.us and beyond, she hopes to explore ways to enlarge shred narratives, thereby enlarging our pictures of God, of ourselves, and of the expressions of God’s mission in the world.