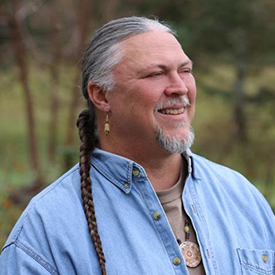 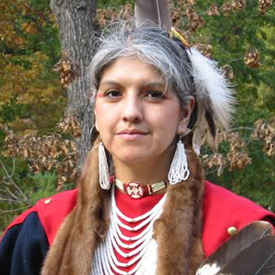 Rev. Dr. Randy Woodley is an activist/scholar and distinguished speaker, teacher and wisdom keeper. He addresses a variety of issues concerning American history and culture, faith and spirituality, race, shalom, postcolonial theology, community-building, Indigenous realities, diversity, regenerative farming, climate-change and our human relationship to the earth. His expertise has been sought in national venues as diverse as Christianity Today, The Huffington Post, Moody Radio and Time Magazine. Besides his books, he has written dozens of chapters, articles and scholarly entries. Dr. Woodley currently serves as Distinguished Professor of Faith and Culture at George Fox University/Portland Seminary.

Dr. Woodley’s books include: Becoming Rooted: One Hundred Days of Reconnecting with Sacred Earth, Indigenous Theology and the Western Worldview: A decolonial Approach to Christian Doctrine, Decolonizing Evangelicalism: An 11:59PM Conversation, The Harmony Tree: A Story of Healing and Community, Shalom and the Community of Creation: An Indigenous Vision and Living in Color: Embracing God’s Passion for Ethnic Diversity.

Randy was raised near Detroit, Michigan and is a Cherokee Indian descendent recognized by the Keetoowah Band. He has served as a member of the Oregon Department of Education American Indian/Alaska Native Advisory Board, Greater Portland Native American Climate Council and other service organizations, including being a founding director of NAIITS, The North American Institute for Indigenous Theological Studies.

Dr. Woodley and his wife Edith are co-sustainers and co-hosts of a regenerative teaching farm, school and community in Yamhill, Oregon called Eloheh Indigenous Center for Earth Justice and Eloheh Farm & Seeds. The Woodleys have been innovators and activists serving and mentoring America’s Indigenous people and others for over three decades. Randy and Edith Woodley have four grown children and six grandchildren, all living in the Pacific Northwest.

Edith Woodley is a teacher/mentor on issues concerning Native American Spirituality and Creation. A full-time mother, grandmother and activist farmer, she has developed a unique relationship with the land, as well as insights and skills concerning how to raise a family on a small farm. Edith is also an artist, whose beadwork jewelry is displayed far and wide. She is an Eastern Shoshone tribal member raised on the Wind River Indian Reservation in Wyoming. She graduated from Bacone Indian College in Muskogee, Oklahoma and is a co-founder of several organizations with her husband Randy Woodley.

The Woodleys, in their pursuit of eco-justice and co-sustaining Eloheh Indigenous Center for Earth Justice, served together on the Greater Portland Native Climate Council. Edith and Randy have been involved in mentoring Indigenous leaders and others for over three decades. As co-founders of the non-profit Eloheh/Eagle’s Wings in 1999 (eloheh.org), they were early innovators in what became known as the Native American Cultural Contextual Movement. Their service to the most disenfranchised people in America led them to become serious about important issues such as racism and eco-justice. In 2016, Edith and Randy became co-sustainers of Eloheh Seeds, propagating Open Pollinated, non-GMO, farm-direct, heirloom seeds (elohehseeds.com).