You are here: Blog / General / On Freedom Road: The Fruits of U.S. Exploitation of Immigrant Labor – Migrant Workers and Detention 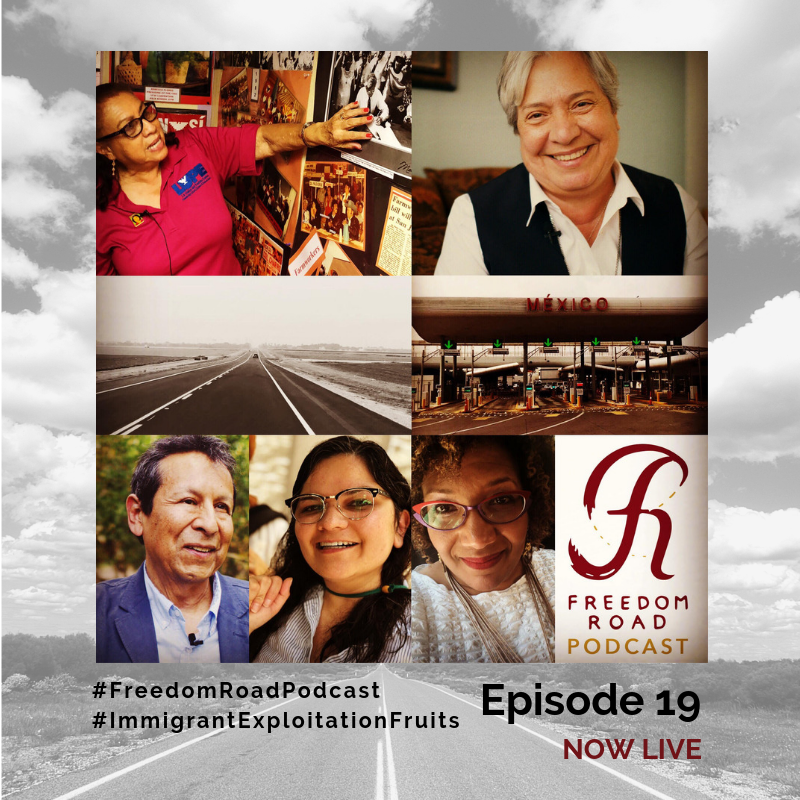 In this second episode of the Freedom Road Podcast two-part series on Immigration, Exploitation and Labor in the U.S. join host, Lisa Sharon Harper, and company as they travel from The Alamo to the Borderlands; shining light on America’s labor system–a system perpetually dependent on the no-cost and low-cost labor of black and brown immigrant labor.

Listen in as Harper processes with conversation partner, Sandra Ovalle (Sojourners), sound engineer David Dault (Sandburg Media) and videographer Alize Jireh Yaccino (The Work of the People). Over the second half of their 1500 mile journey Harper and company unearth the true (and buried) reason for the battle at The Alamo and the establishment of the State of Texas. They illuminate the racialization of Mexican-Americans with Michael Mata (Transformational Development Specialist) and examine the conditions of the mid-20th century Bracero Program and subsequent migrant worker programs with Juanita Valdez-Cox (LUPE). Finally, they lament the death and exploitation of detained children–separated from their parents in the borderlands of McAllen, Texas with Sister Norma Pimentel (Catholic Charities of the Rio Grande Valley).

NOTE: While at The Alamo, the Freedom Road Podcast crew was approached by the a member of The Alamo media team and asked to stop recording because we did not have a permit. We agreed and moved across the road to public land where we processed our experience of The Alamo and the carefully crafted narrative it’s owners protect and maintain. No images or sound recorded on The Alamo property are used in this production.

So certain that when I call on God, God can hear me.

Though I have no riches in this life
I know that in God’s glory I have a mansion.
A lost soul in lack received compassion from Jesus Christ

Hail Mary full of Grace,
the Lord is with thee.
Blessed are thou among women

and blessed is the fruit of thy womb Jesus.

Holy Mary Mother of God,
pray for us sinners

now and at the hour of our death

“The Echoes of Slavery: Recognizing the Racist Origins of the Agricultural and Domestic Worker Exclusion from the National Labor Relations Act.” by Juan F. Perea

The Supreme Court’s Dred Scott Decision of 1857 declared that a free black man was NOT a citizen, therefore had no rights that a white man needed to abide. Formerly enslaved people won citizenship with passage of the 14th Amendment. The Dred Scott Decision was reversed through the 14th Amendment, but the 13th Amendment left a loophole. Slavery was illegal, except in the case of imprisonment. Thus, the post-Antebellum system of peonage/convict-leasing was a way of stripping newly freed slaves of their freedom and, by extension, the rights of citizenship; making it possible to exploit their labor again. Exploitation of undocumented and detained immigrants is based on the logic of the Dred Scott Decision that proclaims non-citizens can be exploited.

Full transcripts of both episodes will be released soon. Follow Freedom Road on social media and join our newsletter list at www.freedomroad.us for updates.

Click here to find out how you can join us on a Freedom Road Pilgrimage.

The Call to be a Better America ~ Lisa Sharon Harper