You are here: Blog / General / Reflections from The Justice Ministry Pilgrimage 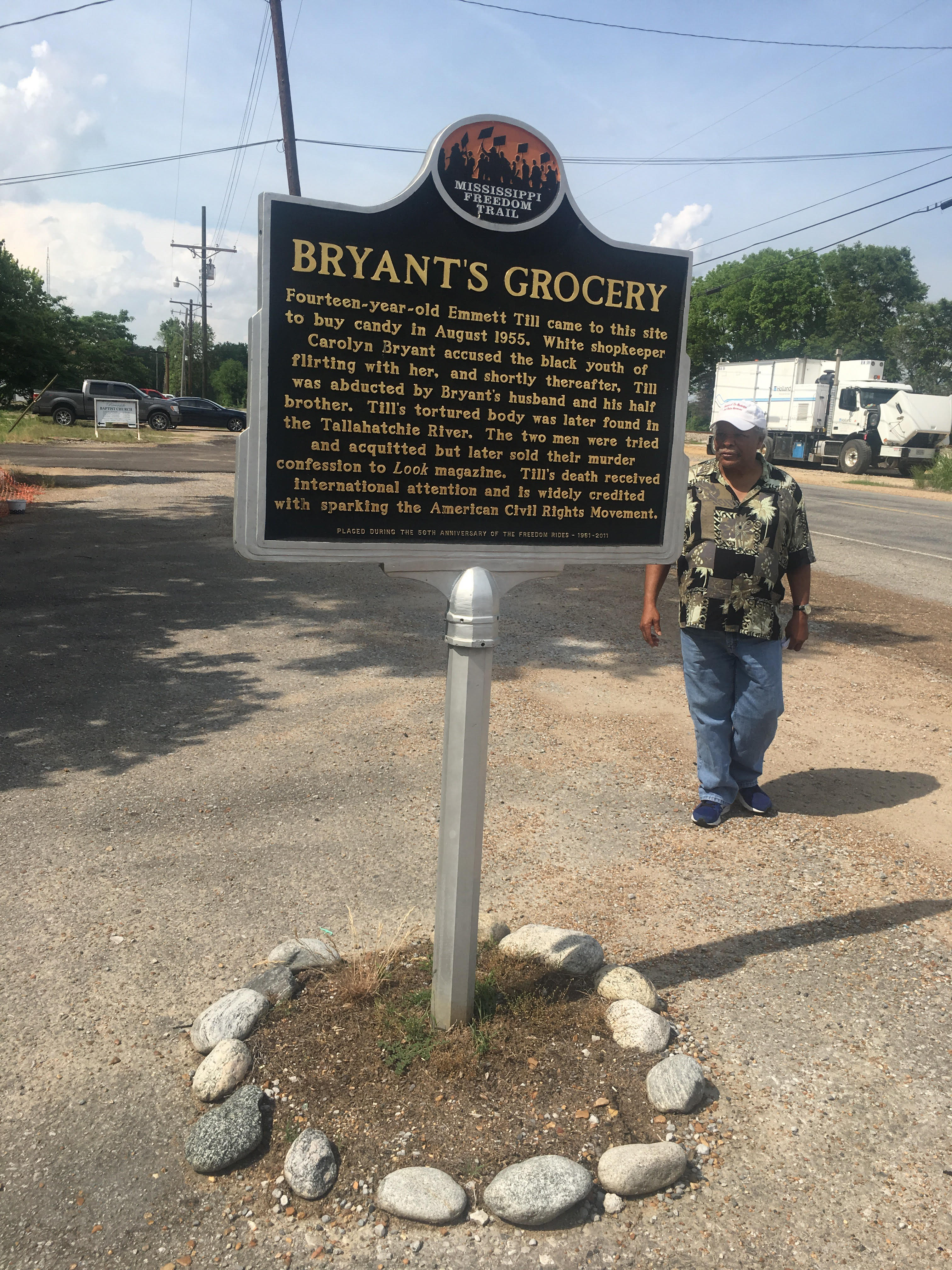 It’s a hot afternoon in Money, Mississippi, and I’m separated from my friends by a road, a railroad track, and a lot more. They stand at the edge of a field filled with tender corn stalks just beginning to peek through the soil. They look off into the distance, past fifty years of history, to the place where once stood a small house in the midst of cotton fields. And they commit an act of sacred remembrance and prophetic witness, fueled by an intense identification: Emmett Till could have been me. He could have been my brother, my son, or my friend.

Shading my pale skin from the sun, I stand looking at them with my back to the shell of the store where Emmett Till was not so much falsely accused of accosting a white woman as rightly suspected of undermining a system of brutality and oppression by refusing to live in fear, even unwittingly. The store is now a crumbling facade draped in vines. I can hardly see it, hidden as it is in the overgrowth of years of neglect and denial.

Lisa Sharon Harper, our guide on a pilgrimage to retrace and relearn the story of race and faith in America, has taught us about the narrative gap. That’s the distance between what we tell ourselves about race, what the official story is, and what actually happened to those whose stories and lives were so threatening that they had to be terrorized and murdered in an attempt to kill every counter-narrative.

For someone like me, a white man standing in Mississippi, looking at a group of friends and fellow pilgrims who are all people of color, the narrative gap is also the distance between what is true and what I would prefer. I would prefer to stand with my friends, but I know their experience of this place is so different from mine: personal and not just historical, emotional and spiritual as well as intellectual. The physical distance between us hasn’t created the difference in our experience today; it only highlights it so I can see it. This distance has been created by privilege, the legacy of my pale skin shielding me from violence.

Today the distance is painful as I yearn for my friends, knowing that their experience of sharing in his sufferings is something I’m reaching for but can’t quite apprehend. Today, finally, I feel the distance for what it really is, not a privilege but a problem. I want to be with my friends, to choose proximity over distance, to close the gap between us. But I know more than a highway and a railroad track separates us.

I’m separated from suffering with my friends by a whitewashed gospel of privilege that says Jesus suffered so I don’t have to. It has worked deep within me an assumption that the peace I want can be secured by the blood of another. But this muted gospel must be replaced with one more rich in color, more realistic, and more embodied: Jesus suffered because I suffer.

I stand paralyzed looking at the gap my privilege creates and my gospel reinforces. I look at my friends making a dread-filled and deep identification with Emmett Till. I feel overwhelming sorrow at the gap between us. I long more viscerally than I ever have to practice and experience true reconciliation, which will close the gap. But I know it will involve more than simply walking across the street and standing next to them. In some ways, that would still be a gospel of escape.

And so I let it catch up to me there, the truth I’d rather walk away from, the whisper that moves among the vines behind me. I have work to do on this side of the road. True reconciliation won’t happen without truth telling, without repentance, without identification. Not one more white man identifying as a victim, nor as a hero. But a deep and dread-filled identification I push away with every instinct in my body. An identification that is as necessary as it is painful: Roy Bryant could have been me. It could have been me who killed Emmett Till.

Then gently come the words Dr. King spoke at the funeral for the four little girls killed in the Birmingham church bombing: “We must be concerned not merely about WHO murdered them, but about the system, the way of life and the philosophy which PRODUCED the murderers.” And I can see it now more clearly. My identification with Roy Bryant will help me to identify the system of white supremacy that made it possible for him and his half-brother to commit murder with impunity. And once I identify white supremacy, I can begin to dismantle it. I have work to do on this side of the road.

Peter Hough is the pastor of The Alton Mission, a Free Methodist church dedicated to friendship with people experiencing poverty as a sign and foretaste of the kingdom of God. He grew up in Kansas City, MO, and spent eight years in Pasadena, CA, part of it at Fuller Theological Seminary to get an MDiv. For the past eight years he and his family have lived in Alton, IL, across the Mississippi River from St. Louis.